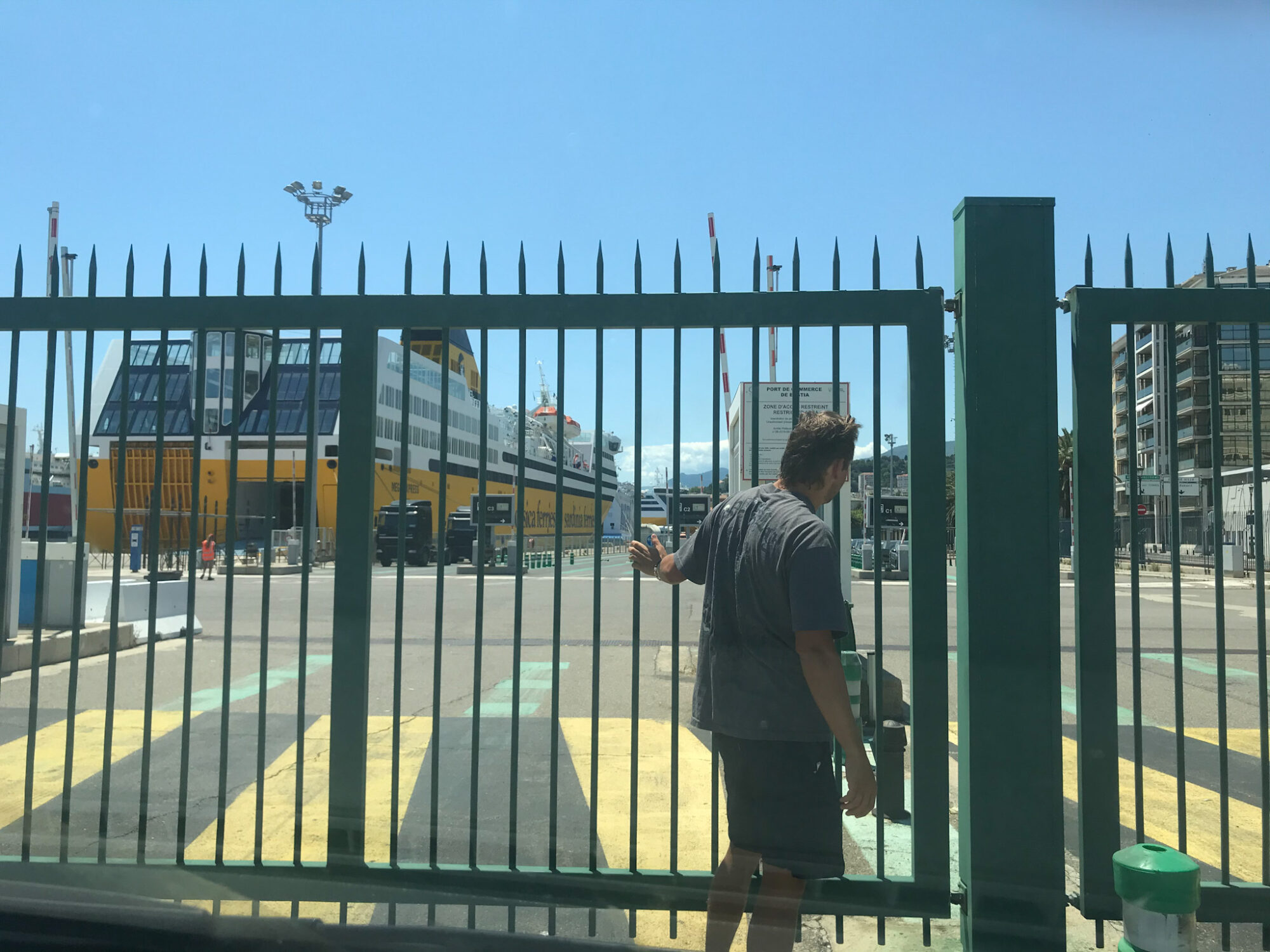 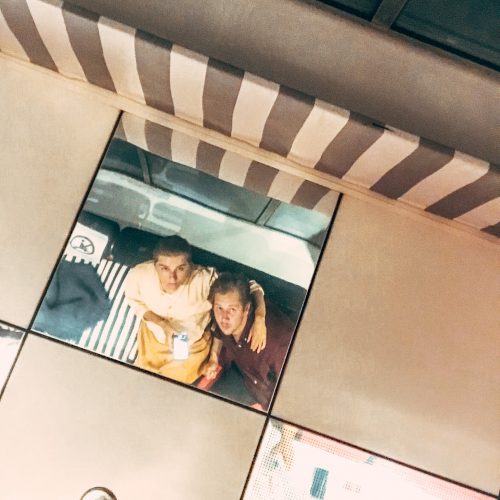 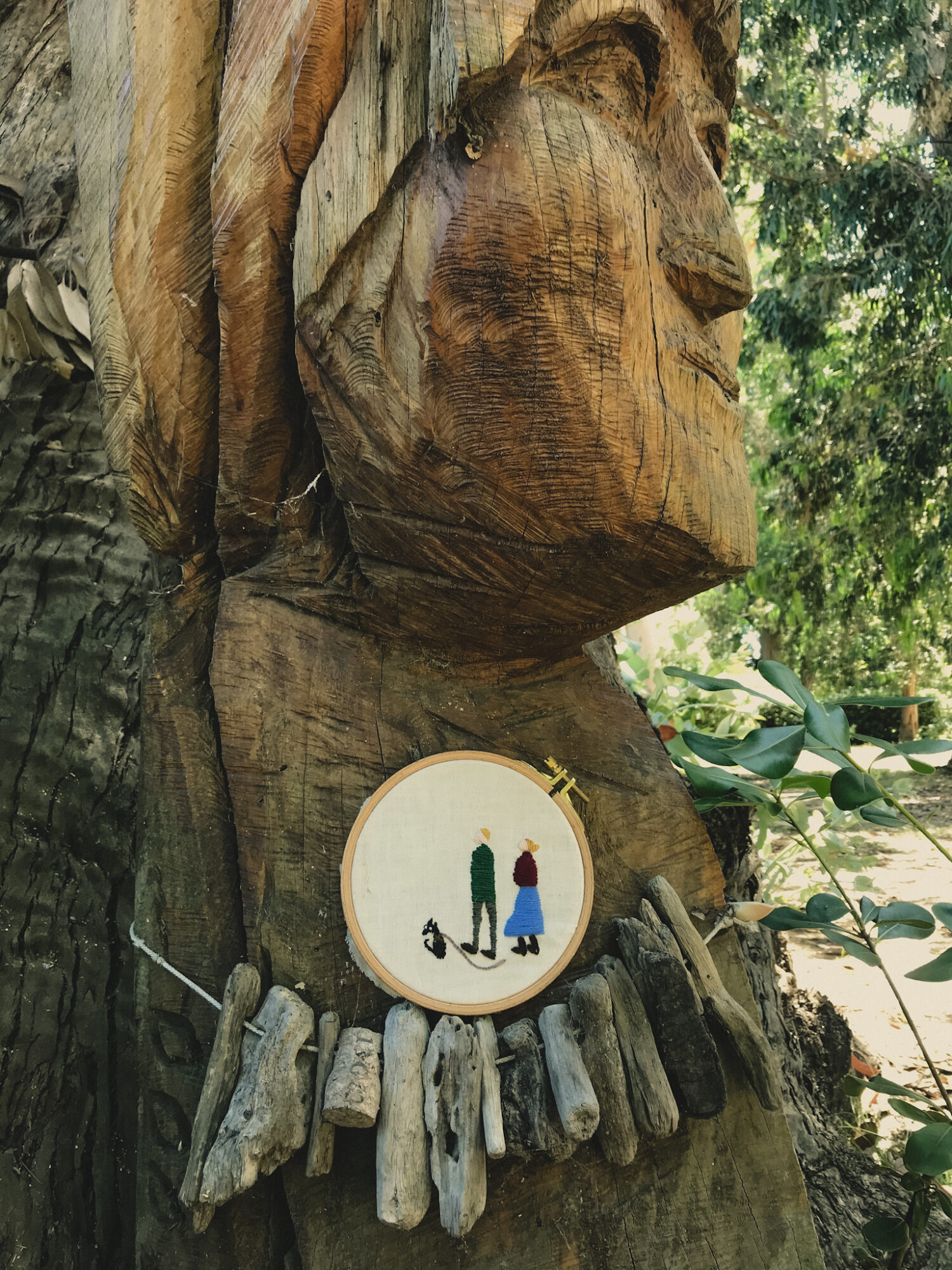 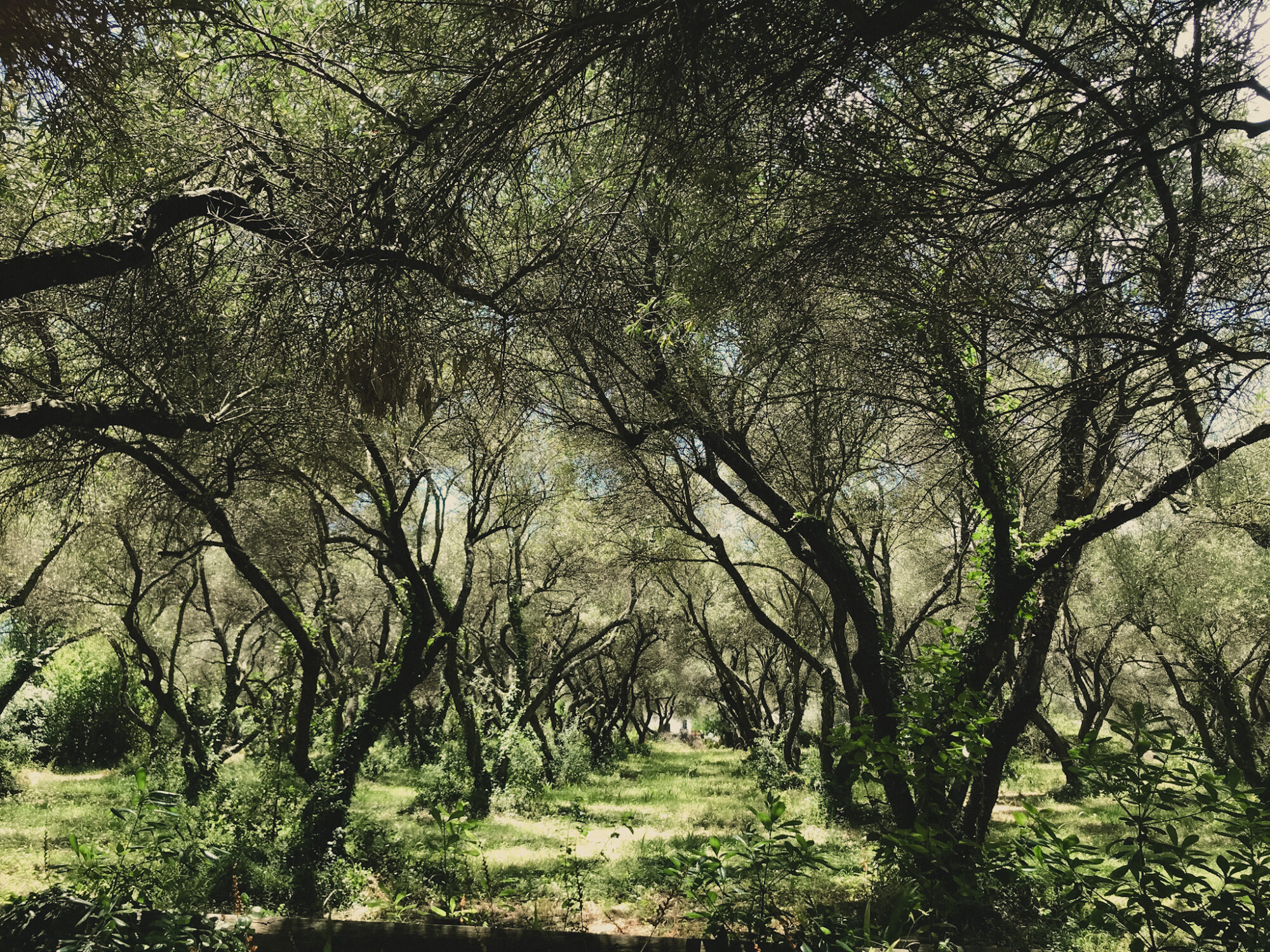 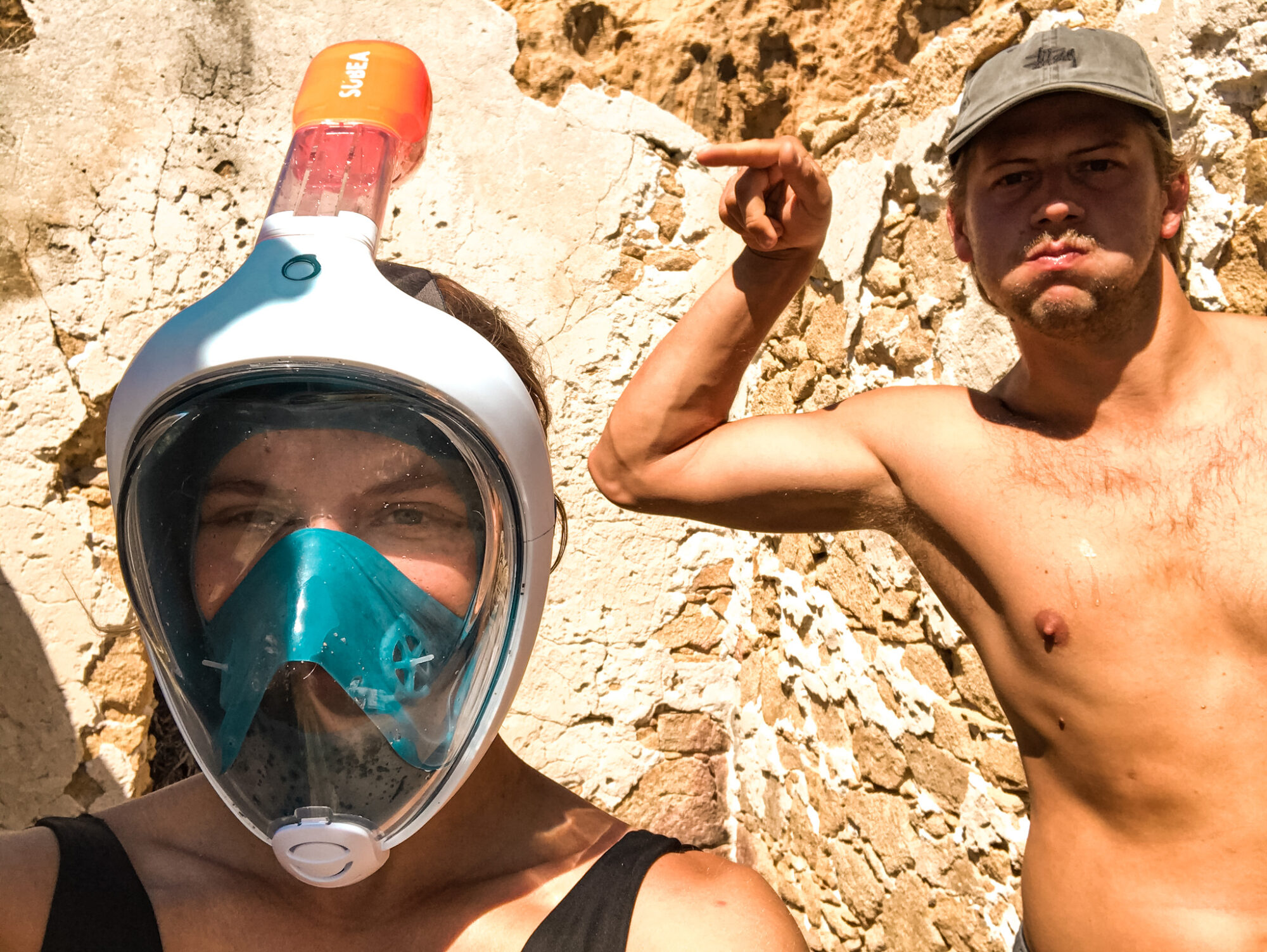 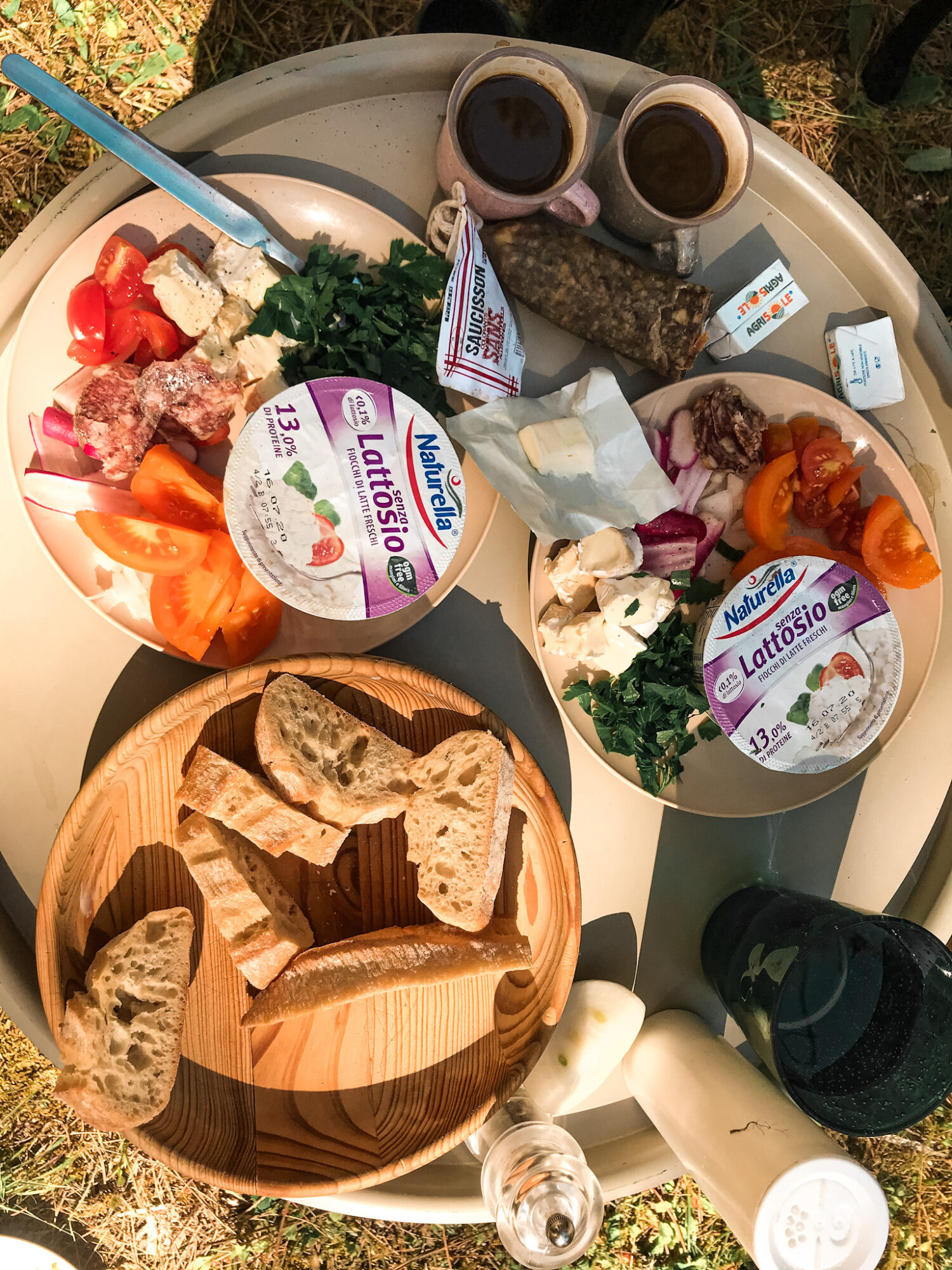 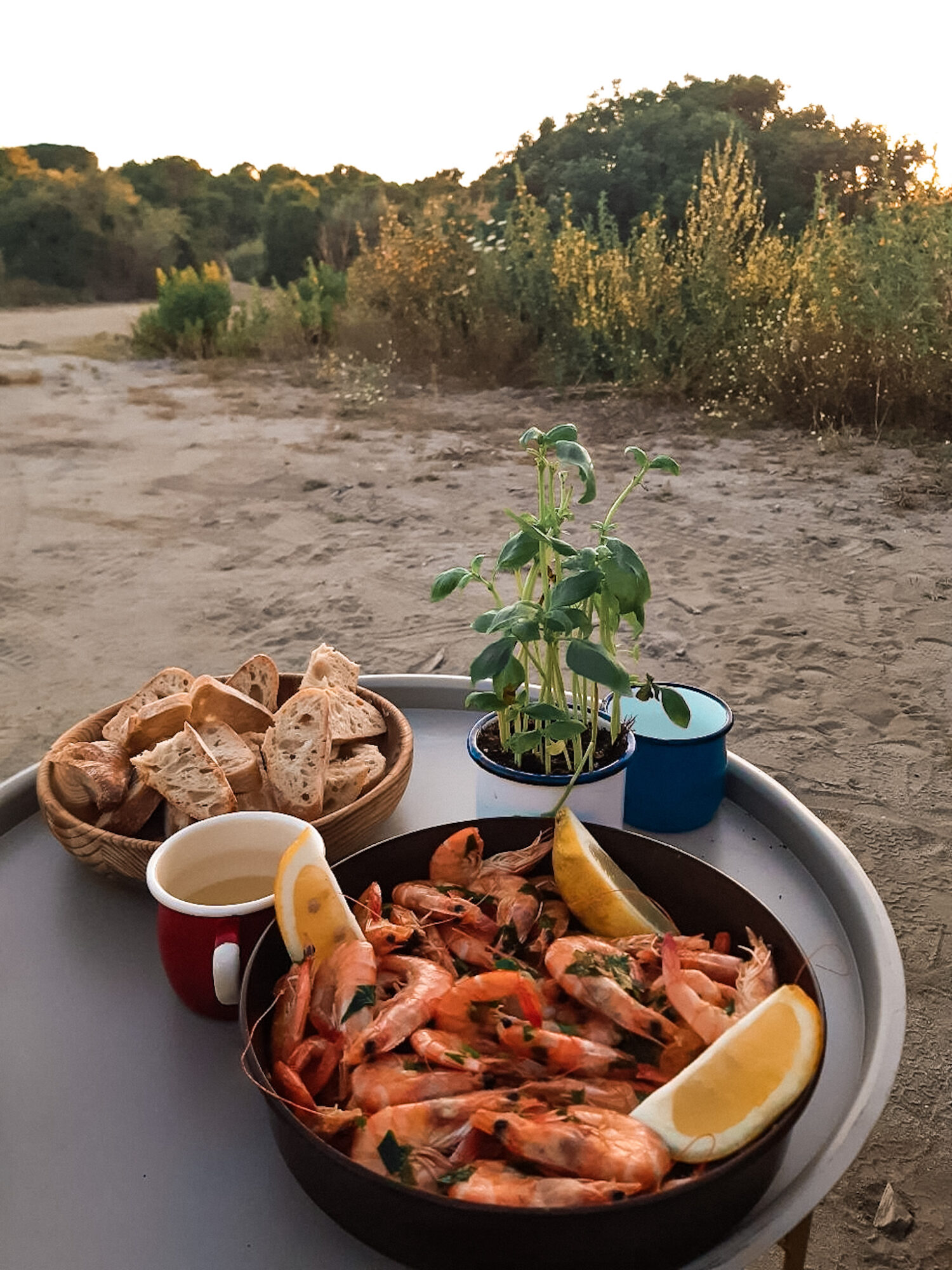 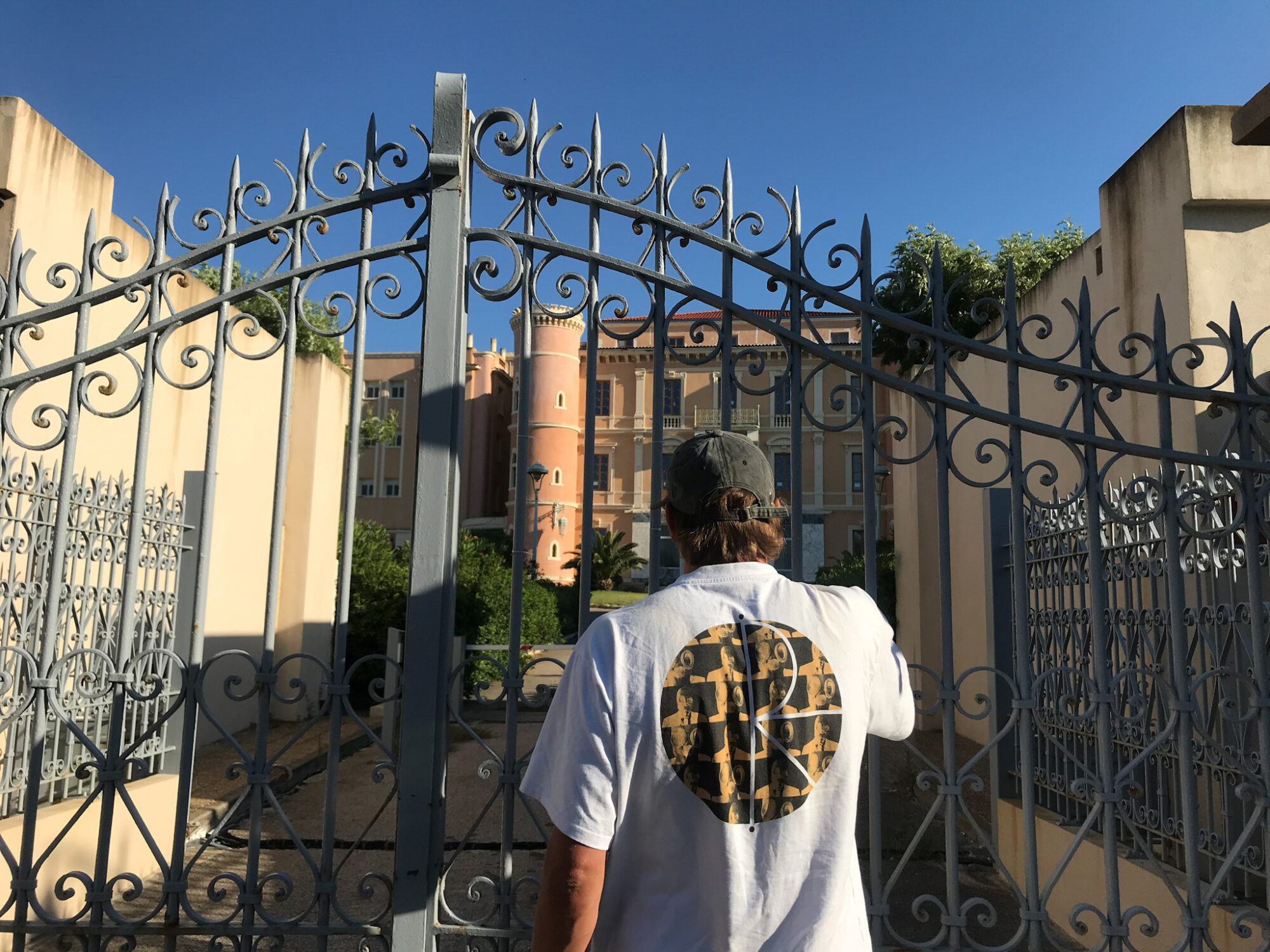 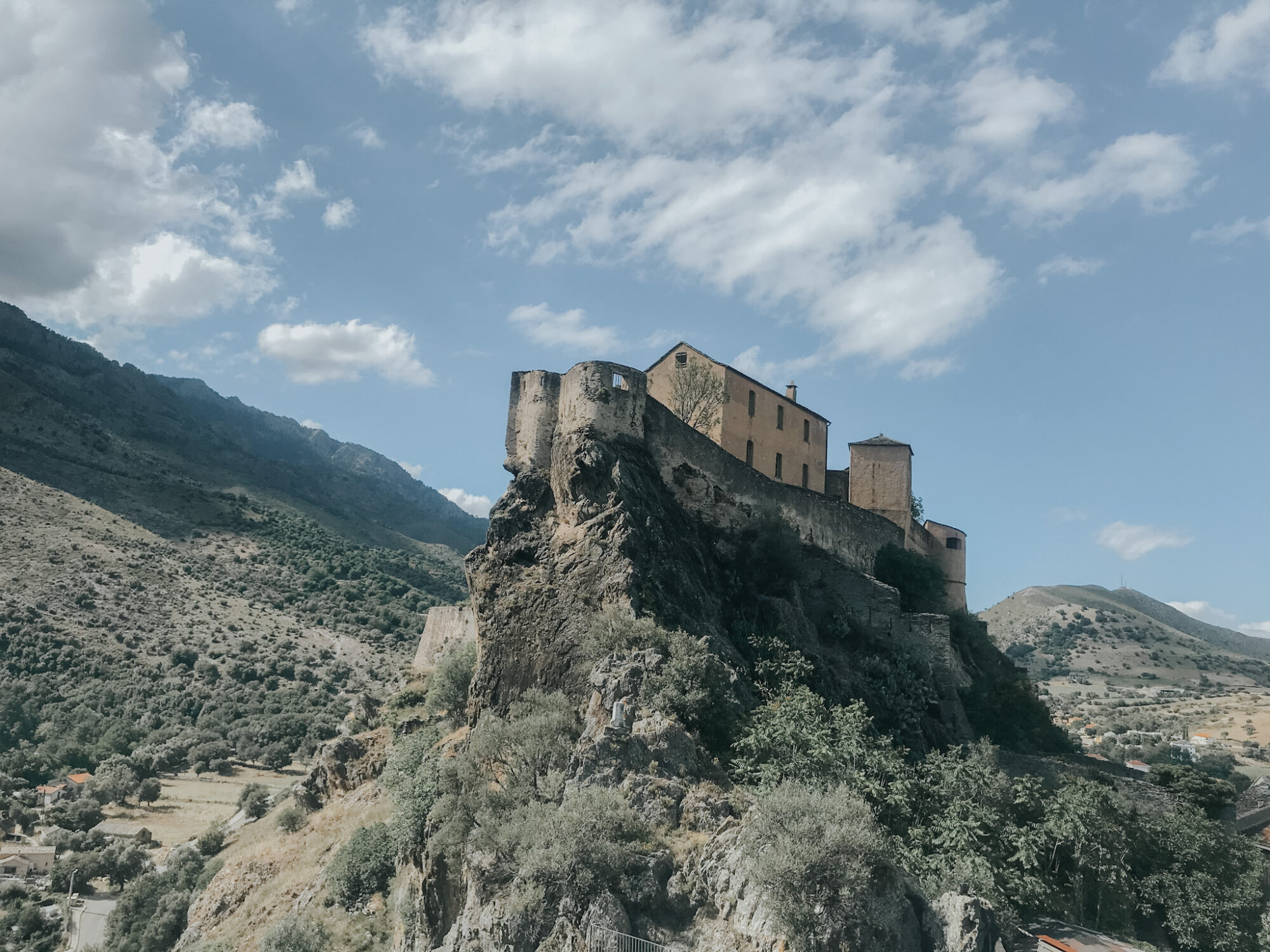 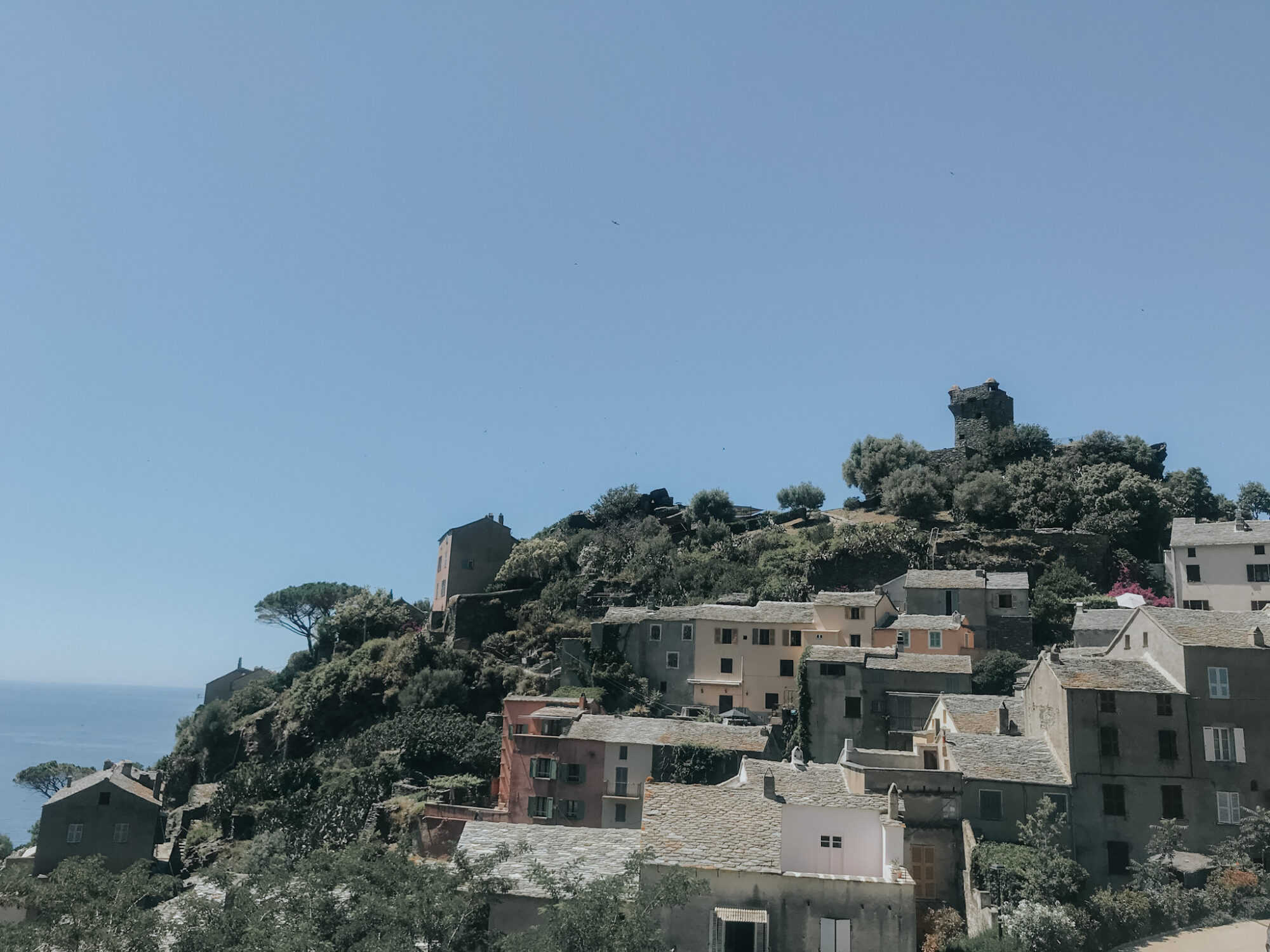 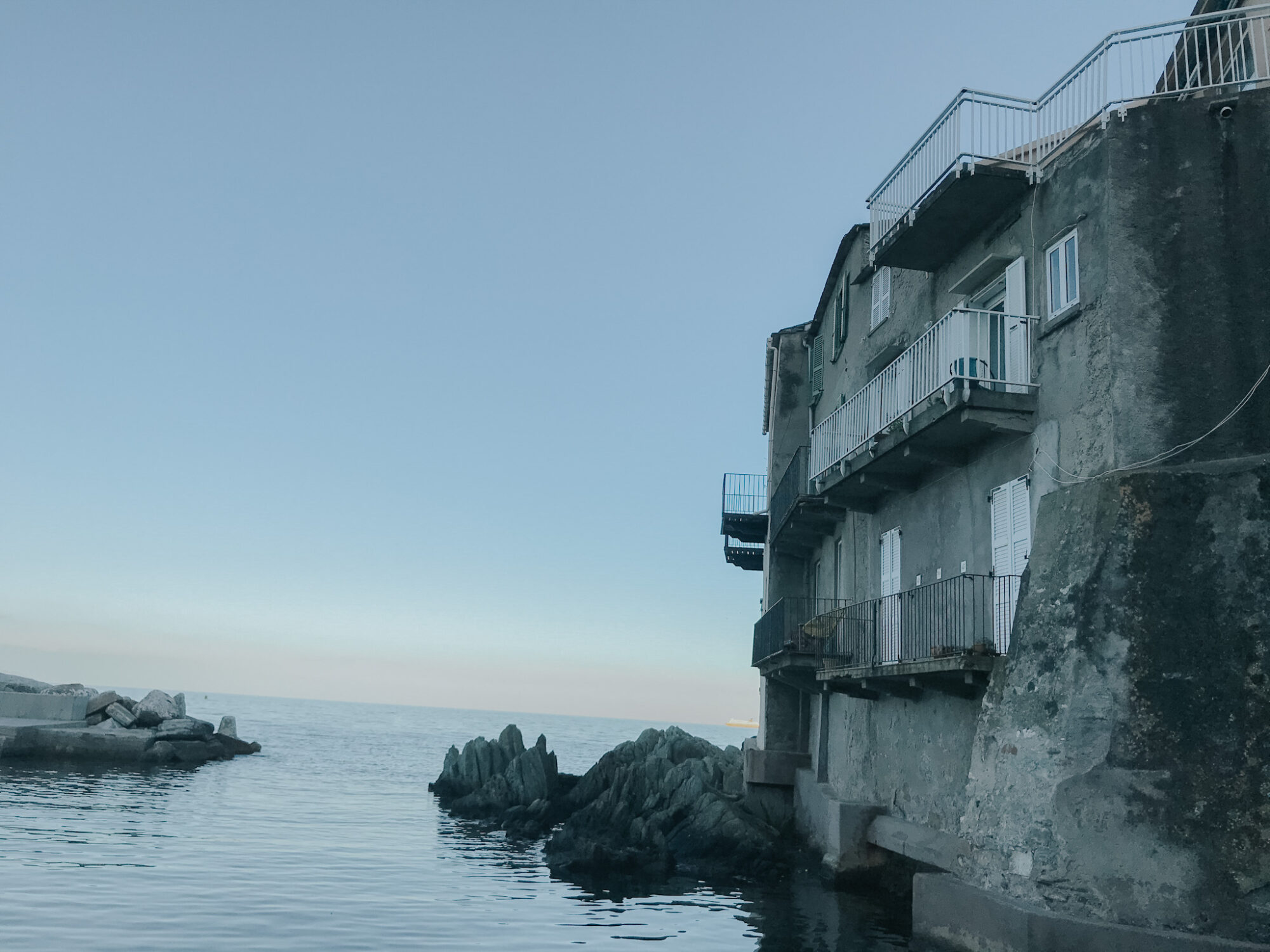 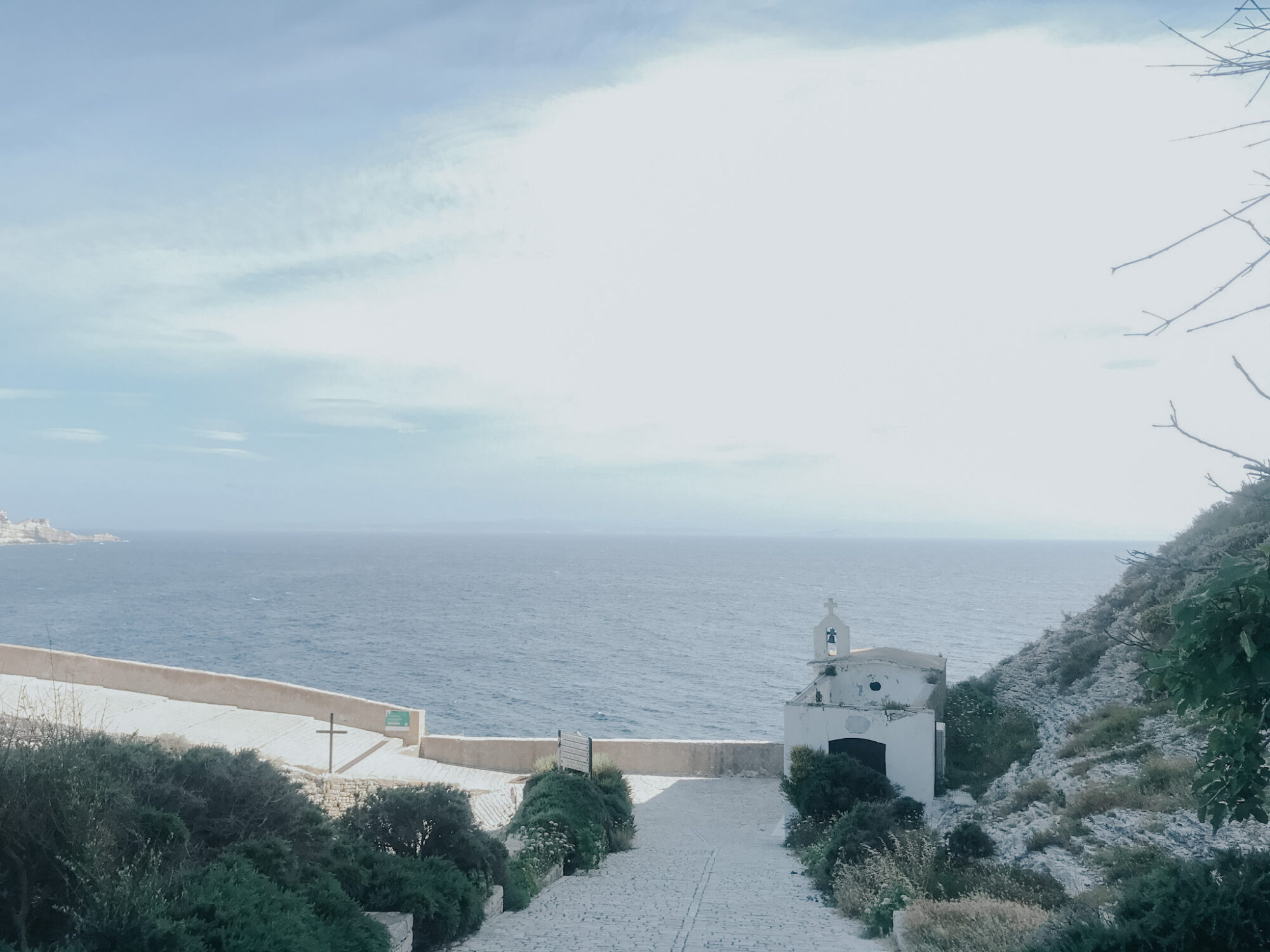 It turns out we have the best fun on the ferries. Especially the long-distance ones. It started with sailing on the famous Polferries lines from Gdańsk to Swedish Nynashamn. A separate note could be written about the phenomenon of these crossings. I think that a special deck with grill and sausages, a cinema room with a single screening, a disco in a circular log with a roof in the form of an astrological observatory and drunk men taken out in wheelchairs by security guards speak for themselves.

Even our dog seems to be used to the ferries he was once terrified of, like most things in his post-shelter life. He is calmly basking on the deck, looking with curiosity at the waves, the sight of which ultimately terrifies him, so he steps back into the shadows with caution.

By boarding the ferry, you are entering a new world. And sometimes there is not enough time to discover it during one crossing. Cafes, sleeping compartments, duty-free shops, one-handed bandits, deck chairs, baths and showers, dog runs and, finally, interesting stories from fellow passengers. Everyone is on it for something, some faces testify for themselves. No need to ask. We don’t even want to think about what’s happening on real cruisers.

We sailed from the port of Santa Teresa in Sardinia towards Corsica. And although the crossing was supposed to be short, the ferry was small, it was still fun. The ferry at 9 am, which we entered excitedly, smuggling a dog, ATTENTION, hit the rock. It happened in the port itself, so we were ordered, as a precaution, to get off the boat and wait for the next one. The captain, in his generosity, opened the bar on the boat to everyone, so we could have fun with our gifted beers. Donated pints are not to be looked at, but the captain, who was sweaty, apologized to us, not wanting to become another Schettino, yes. While waiting with a beer in the hand, I was looking for a souvenir magnet with the Sardinian flag, but Billy advised that for 4 euros in Corsica I would buy two, and God willing I would get the third one for free. I trusted him. Use the ferries, and emerge in what they have to offer.

We rarely sleep on campsites, so when a decision is made about such accommodation, we are in quite a lot of emotions. We cannot decide where to put the van, whether there is good ground leveling, how much shade there is, what kind of people are around, preferably it should be quite intimate and with good distance to showers and toilets. Generally a fat logistics operation. Our first campsite in Corsica is camp Rodinara, near Bonifacio. That’s where we maneuvered so much that a branch stuck in the rear side window of the van and smashed it to dust. So we did the rest of the Corsican adventure with a picturesque cardboard on the side.

What doesn’t kill you, makes you stronger. Rodinar’s campsite had much more to offer. From the morning we warmed ourselves in luxury by the pool overlooking the sea, under a bamboo umbrella, on a sunbed. We recommend this place. Elegant showers, cafe, pizzeria, swimming pool, small shop, where I finally got the Maura head magnet – all for 22 euro a night plus a dog, everything included.

We also recommend camping Calamar, near Cervione. Especially in times of coronavirus. There’s a big emptiness in there, just us and 3 other vans. 12 euros a night, showers right on the beach, sinks with a wonderful sea view. Parking in an old olive grove with plenty of shade and a hippi vibe created by the faces of the pachamama carved in the trees. In addition, Billie wanted to play hide and seek. Upset, he said that he had lost 700 euros and was going through the van furiously so that I would finally find his loss, which I supposedly hid anyway. Picturesque paratroopers in the blue sky silenced the emotions of this action. A German couple with two small children settled next to us. They cried at night, and from the tense relationship felt between their parents, please, save us god and pachamama.

Camps are also small worlds, use them in moderation, just like us, then they are more appreciated. And maneuver with your head.

Corsica’s beaches are picture-perfect. Azure blue water, crystal clear in color, a white sailboat skimming the horizon. We are looking for shade among pine trees, Farel is sitting in a cafe cupboard. All this is happening near the town of Aleria. In addition, we are supplied with shrimps from the market for 2.40 euro per box, Pietra beer with an extremely dark color pleasantly chills the throat. Broken van glass doesn’t bother that much anymore. Plus, Billy is compulsive in composing songs. Although the singing is a bit at odds, he is a class-writer. However, it is better if the lyrics of these songs remain in the walls of the van. Singing in a van is cool, and if you also arrange your own lyrics, it’s a double respect.

On the road from Il Rousse to San Florence, another great sandy spot. We recommend playing paddles until you lose your breath, then the sunsets taste like never before. We experienced a spectacular one, at the end of a blind road, where we parked the van for the night, and in the morning Billy fell into his own shit pile when the branch he was clinging to could not bear his weight and his stool. We took it as a good omen. Because soon we had one of the best snoarklings.

I recommend this beach hobby to everyone, being a newbie in the subject myself. The multitude and beauty of the underwater worlds are beyond words. In the vicinity of the lighthouse in Il Rousse, I even spotted one red starfish, nonchalantly stretched on the stone slope.

One more thing. The black beach in Nonza is a must see. Here it is enough to pull out the photo camera and the photos do themselves, the unfinished film frames stick in the head. The stones, dark with asbestos shells, burn your feet, and the blue, salty as hell water carries the body and waves it slightly, cooling it pleasantly. Billy came up with a brilliant idea for a competition to keep the hot stones between the buttocks as long as possible. He then dropped them, stuffing as much as he could beforehand, happily crouching, simulating diarrhea. The beach is definitely associated with fun for this person. Or maybe with a tan, which he gains bravely and evenly.

Ille Rousse is a significant place for Billy. We couldn’t miss it while in Corsica. He walked around it almost like a mayor.

It was here that his mind dissolved in cold-blooded memories of working at the Napoleon Hotel, in the city center, about six years ago. He completed a 6-month stay as a cook, where he took his first steps in this profession, and as an ambitious person he overcame the inconvenience of pay, bills and food. As he says, he used to smoke a lot and sometimes skateboarded. He would steal mangoes from refrigerators and eat them two grits, also packed two in his roommate’s bag with the recommendation to eat them quickly, preferably in the toilet. Although, as you can see, the conditions were severe, he remembers this place with nostalgia and feels like a former citizen of the city. He mentions the nicknames Executour and Dominatour (with a French accent) allegedly given to him by local girls.

Despite the knowledge of the town, he chose a weird place for the night. It was a parking lot under an old lighthouse, where it started to get scary around midnight. It was Friday. Drunken youth started playing loud music from cars and driving them in a dizzying way too close to us. We watched it all in the sweat, hidden behind the silver window covers of the van. Only after a slight re-parking did we manage to fall asleep peacefully and in silence.

Sightseeing with local guides is always included. Those with vivid imaginations have an even bigger plus with me.

5. Road to Cap Corse – Corsica has it all

The interior of Corsica is as beautiful and wild as the interior of an exclusive island can be. It is similar in beauty to the Dolomites, with mountain jaggedness piled up on the horizon.

Yesterday we slept in a forest near the lake to come to the conclusion that Corsica has it all. Beautiful forests, charming lakes, blue sea and old, stylish houses surrounded by high mountains. It also has loose living pets. In the forest we were awakened by the mooing of the cows that ran and chased each other among the ferns in the morning. We also passed herds of free goats and even black pigs, which Billy says are typical of the region.

This belief was doubly confirmed by the road to Cap Corse. Rotary in nature, stretched over the very edge of the sea, but at a considerable height, which made some bends spontaneously hold our breath. On the route, we passed unmoved old people playing petanque calmly, groups of goats walking carelessly by the road, as if they didn’t care about traffic laws, and that’s good. It is a pleasure to stop here. Old chapels, mansions built in an insular, antique style, majestically piled up into small villages and the icing on the cake – an asbestos mine near Nonza. Straight from a Wes Anderson movie. It is closed, but it adds character and mystery to the island.

Make sure to check out Corte, a lovely fortress on a weathered hill with a magnificent view of the Corsican landscape. Mountainousness combined with sea. Pure genius.

We passed one by one the parking lots by the sea. We spent our last night on one of them, 15 minutes from Bastia. We poured local white wine mixed with even more local Orezza sparkling water down our throats to sleep. Must drink …